MES from granIT have long been fully integrated and accepted in WeberHaus’ prefabricated house production. A conversation about new territory, step-by-step, table utilization, robots and trolleys. 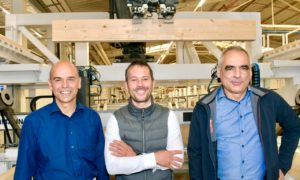 At WeberHaus in Rheinau, Baden, the granIT Manufacturing Execution System (MES) has also been ensuring efficient processes in prefabricated house production since the beginning of 2021. We talked to Alfons Obrecht (Assistant Production/Technical Management) and Jörg Marin (Assistant Technical Management) about their experiences with the granIT flow solution. Just so much up front: satisfaction factor = high!

granIT: WeberHaus has been one of the most established companies in the prefabricated timber house industry for more than six decades. Not only your products and prefabricated houses are successful on the European market, but also their production is considered trend-setting. How did you actually come to integrate granIT’s MES into production?

Jörg Marin: Among the current topics, such as digital processes, higher automation, etc., MES also belongs on the agenda of modern and future-oriented production. Since we will gradually renew and adapt the production, the opportunity arose to integrate the appropriate MES at the same time.

Alfons Obrecht: MES is not new working field for WeberHaus. It was and is clear: for a smooth as well as technically and economically efficient process in production, we will no longer be able to manage without MES.

granIT: Experience has shown that especially the introduction phases in the step-by-step system are tricky, to say the least. How did you experience this in the cooperation with granIT?

Alfons Obrecht: Compared to the implementation phases of earlier, similar systems, technically everything went smoothly and flawlessly with granIT’s MES. That really surprised us to this extent.

Jörg Marin: An important aspect for the introduction of something new is the acceptance of the employees for this. Since the employees have been used to certain systems/processes for many years, changes are correspondingly difficult.
The good cooperation with the experts at granIT and coherent communication was very helpful here and there were no major problems during the employees’ familiarization and adjustment phase.

granIT: Speaking of problems, please tell us about the biggest challenges you faced. 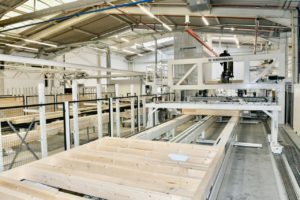 Alfons Obrecht: The biggest hurdles we had to overcome were with the multiwalls. In this production stage, we also improved essentials with granIT’s MES. For example, we had to rethink our usual numbering system, which took some convincing. But because the benefits were realized very quickly in 3 departments, this was soon no longer an issue.

granIT: What production-related advantages did you expect from the use of granIT MES?

Alfons Obrecht: AV production: Centralized instead of project-by-project multiwall production, thus reducing the workload for the construction. Horizontal wall production: Better table utilization, fewer walls that needed to be created.
Upright wall production / loading: Consideration of the loading sequence thereby better utilization of the available buffers. The latter only worked because the loading sequence stored in an Excel sheet was included in the creation of the Wup files from CAD/CAM and the corresponding keywords were preassigned in the Wup file without the user having to do anything. This required a certain amount of preparatory work on my part, but it quickly paid for itself. 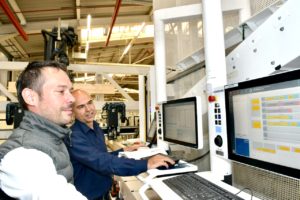 Jörg Marin: A certain consistency also had to be achieved. In the past, employees manually determined the order of the walls or components. Now, rules have been set up in the system that rule out errors and enable consistency in the loading process.

granIT: Time is an important factor in the introduction phases of new systems such as MES. Have there been any downtimes at WeberHaus?

Jörg Marin: Let’s put it this way: nothing serious because of granIT’s MES.

Alfons Obrecht: The only thing I can think of is that in the initial phase we sometimes had to restart the Control Center. But after a short time this was no longer an issue, because everything had settled into the system.

Alfons Obrecht: Of course, during the installation and conversion phase, we had wish lists that we passed on to granIT. There were a few hurdles to overcome due to the machine’s peculiarities. The fact that the files issued by granIT for 20-year-old existing machines and for the new system had to fit was also a challenge in itself. Even a machine that is not from the Weinmann portfolio but works with the Wup data set had to be supplied with data.

Jörg Marin: For us, it was obvious that problems are largely avoided from the outset with a constellation like WEINMANN and granIT. Since they have already realized several projects together they can absolutely rely on each other.

Alfons Obrecht: And if the software developers react immediately and in a short way, as is the case with granIT, then this is a huge relief.

granIT: Let’s stay a little longer with the step-by-step solutions. Are you planning further MES deployments?

Alfons Obrecht: Sure, we can’t do without it. We will be replacing older machines in the near future. And they will run most efficiently with MES. There is no other way. Here is another example: MES is absolutely necessary for the loading of the trolley, since the robot can only remove parts from the trolley from bottom to top. This means that the tray trolley must be occupied according to the production sequence, which is actually only possible reliably with MES. 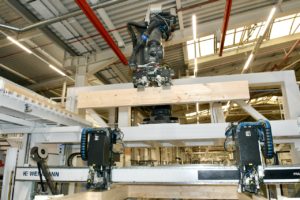 Jörg Marin: So there is a need for the plates on the tray cart to be clearly identifiable, so that the robot clearly knows where which plates are located. There can only be software solutions for that.

granIT: So, in conclusion, you can say that your original requirements, which you placed on an MES like the one from granIT, have been met throughout?

Alfons Obrecht: Correct! But what is almost more important in my opinion is that our suggestions for improvement, our potential for optimization on the freshly installed system were immediately implemented or realized by granIT.

Jörg Marin: It is precisely such individual optimizations, specifically geared to the production line, that are an important aspect when using Manufacturing Execution Systems. In addition, granIT has the know-how in the field of “house construction” as well as the close cooperation with the machine manufacturer WEINMANN. A convincing constellation!