The Natursteinbetriebe Wigastone in Steinwenden, Rhineland-Palatinate, is a prime example of the successful use of MES powered by granIT in medium-sized companies. Managing director, founder and “doer” Armin Wigand reports in an interview about the successful development of his company and the key role granIT software plays in it. 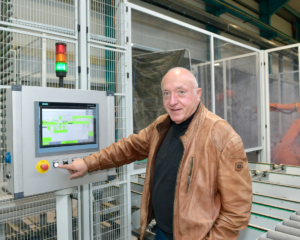 granIT: Mr. Wigand, the processing of natural stones is still a traditional, genuine craft in many companies. With its largely automated production lines, Wigastone, on the other hand, is considered progressive and forward-looking – not least because of digital technologies such as Manufacturing Execution Systems. How did this come about?

Armin Wigand: Well, first of all, you need a certain openness to the world. Germany is not exactly blessed with natural stones for artisanal use. So we have been buying abroad for years, for example, we have a stake in a Chinese company and have worked or are working with Greek and Italian companies. That’s the basis for doing something more than what the typical stonemason can do.
Don’t get me wrong – traditional stonemasons do a great job! But they are limited because they can’t expand their sales. In turn, without sales, no investments are possible. So the smaller stonemasons stick to their traditional jobs, producing kitchen countertops, building monuments for the city or gravestones for the cemetery. Unfortunately, the demand for gravestones and tombstones has declined sharply in recent years, because the number of cremations has increased analogously. Result: 30 years ago we still had 16,000 stonemasonry businesses in East and West Germany. Today, there are just 3,500.

granIT: And how did you ultimately keep your family business, Natursteine Wigand, out of this downward trend?

Armin Wigand: We recognized the signs of the times 25 years ago and were initially able to win DIY stores as customers. For this purpose, we founded our own company – Wigastone – and still produce window sills and tiles today. This then really boomed: we have in peak times, for example. 4,000 containers, 1.5 million square meters of granite tiles were produced in China. We then stamped all of them – 15 million pieces – on the back and checked the quality in each case. All of this was done with systems that we developed ourselves; we did some real pioneering work. 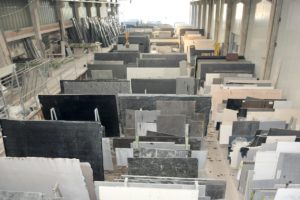 granIT: In view of such figures, the processing of these natural stones, for example into window sills here in your main plant in Steinwenden, had to be done automatically. That sounds a lot like industrial production.

Armin Wigand: Sure, today we are more in the realm of Industry 4.0 than Craft 4.0. By the way, we took environmental considerations into account relatively early on. When we built our new hangar, photovoltaic systems were installed on the roof, of course, and we buried a 160,000-liter water catchment basin underground for our quite high water consumption in production. To name just the most important examples.

granIT: Impressive and gratifying at the same time. Back to production: Why actually window sills?

Armin Wigand: For a natural stone company like ours, this is primarily a mathematical matter. Germany needs about 50 million window sills a year. The stonemasons have lost a large proportion of these over the last 25 years because more and more metal window sills have been used. This gap has been filled by the DIY stores, which closes the circle for us. Over the years, we have developed natural stone systems and about 20 patents for the DIY stores. We produce about 2.70 m long, prefabricated cut pieces, which are then cut to size in the DIY stores according to our specifications and with our systems to meet the customer’s needs. Incidentally, the stones for this have recently been coming mainly from Egypt. The country is closer to us, so the transport routes are shorter, and the quality of the bricks is right.

Supplying not only DIY stores

granIT: Now you and Wigastone are primarily known in the industry for being among the first to automate your production. 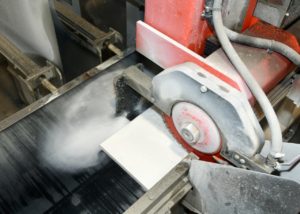 Armin Wigand: We put the plants together, some machines were built especially for us. And this is where MES from granIT comes into play. We work with two production lines: The first can only produce standard lengths and standard edges, for example. We’ve had this running for eight years, and with it we were able to serve mainly the DIY stores, where our cut pieces are then cut to the desired length for the end user with saws that we in turn supervise. But soon it became clear to us that it is not only DIY stores that need sawn timber, but in principle everyone who builds. These “others” want cut-to-size products, i.e. exactly as long and wide, with additional grooves and so on, as required for their very specific building project. And that’s exactly why we built the second plant with two robots, among other things, which is controlled by granIT-MES at the key points.

granIT: That sounds so simple now, but how does a – albeit impressively successful – natural stone and stonemasonry company end up with Manufacturing Execution Systems?

Armin Wigand: Coincidence helped us. A good acquaintance pointed out to us that we basically wanted the same thing that has been done fully automatically in prefabricated timber house production for years. And since MES from granIT are used in most production plants there, contacting granIT was a logical step for us. For the control of an automatic production plant, it ultimately doesn’t matter whether long timbers or long bricks have to be shaped. Later, when we then integrated the granIT software into our production lines, the granIT programmers’ many years of experience with the specific problems, possible complications and “teething troubles” in the start-up phase were added to the mix, which, on balance, saved us a lot of time and nerves.

granIT: Would you like to briefly describe where exactly MES powered by granIT is used in your production?

Using MES to gain time above all

Armin Wigand: Simply explained, the Manufacturing Execution System controls the longitudinal and transverse saws. Even the command as to how long the respective parts have to be that are placed on top comes from the granIT software. The robots then again have their own software – but the MES is always used at the strategically important interfaces.
The granIT software not only controls production as such, but is also used in the warehouse system. This is a very important economic factor for us, because we currently store and digitally manage about 2,500 remnants from past, i.e. completed, productions. So if tomorrow we need a panel in, say, 1.52 m length and 32 cm width made of a certain material, the system controlled by MES tells me that I have just such a part in drawer 103. This drawer is then controlled, the employee takes out the cut piece and places it on the system, which in turn already knows what to do with it. Thanks to MES, there is much less waste than before. Which in turn is an important, resource-saving aspect in our production.

granIT: And what about future MES applications at Wigastone? Successful companies like Wigastone “think about tomorrow today”, don’t they?

Armin Wigand: After a relatively short introduction phase, we currently have our second and MES-controlled plant “running” almost smoothly and without any problems. We can produce between 300 and 400 benches a day! This means that we have exhausted our current order and production volume for the time being. However, should someone need more at short notice, we can run an additional second shift. For us, the next step would be digitally controlled shipping, but that will probably take a little longer. 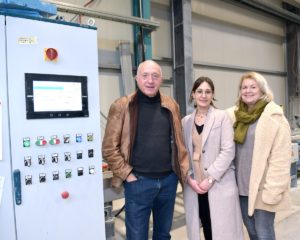 granIT: Finally – what advantages or conclusions do you draw from the use of MES powered by granIT in your automated production?

Armin Wigand: We have gained time! Take a look at the conventional workflows at stonemasons: It can take half an hour or an hour to find the right cutting piece and get it ready for production. With us, this can now be done flawlessly in just a few minutes. Not to mention the production speed, manufacturing accuracy and the resulting flexibility. It may seem paradoxical, but in the production of window sills, price plays a rather subordinate role, time is much more important. What do you think, how often we hear here during the order distribution that the window sills should be delivered yesterday rather than tomorrow, because at the last moment something got mixed up in the house construction planning. Anyone who can then deliver promptly, as we can, is clearly at an advantage.

granIT: Mr. Wigand, thank you for the interview and we wish you continued time savings and flexibility thanks to MES powered by granIT.