granIT employee Lipi Kothadiya has been demonstrating for more than six months that diversity in the team definitely means more creativity and cultural enrichment.
It’s no longer a secret: even (or especially?) in the IT industry, companies with diverse staff have better cards. It doesn’t matter how large or small the respective companies are – mixed teams are more creative, bring more cultural value to production and are important for cross-border customer development and contact.

Diversity enriches
Accordingly, we are pleased about our new employee and real team reinforcement Lipi Kothadiya. The 28-year-old Indian joined granIT six months ago and has already settled in so well that hardly anyone in the team can or wants to remember what it was like without Lipi. Not least because the young Indian also brought about a linguistic change: In addition to Swabian, which had been rather common until then, English is now spoken more and more frequently at granIT, not only with foreign customers, but also among the team itself.
However, until Lipi found her way from her home to Reutlingen, she had to tread one of those much-cited winding roads. And she had to show staying power.

From India to Swabia
Lipi Kothadiya was born in Surat, Gujarat, India. From 2011 to 2015, she studied Information Technology (Bachelors of Engineering) at GTU (Vadodara Gujarat). Her study focus was on C, C++, Java,Algorithms, ASP.Net, HTML, CSS.
After graduation, Lipi worked for two years in India at Yew Technologies in Surat, mainly with programming languages like C# and WinForm.
On January 1, 2018, Lipi married her long-time partner, who was already living in Germany. Speaking of the shortage of skilled workers in Germany, Lipi finally had to wait a full year for the “Blue Card, which is intended to allow “highly qualified third-country nationals to reside in the EU in order to address the expected future or existing shortage of skilled workers in many employment sectors.
Lipi finally moved to Germany on Jan. 1, 2019. She currently resides in Bisingen with her husband. She used the ensuing pandemic years to take language classes, further her professional education (including Microsoft Certification Azure Fundamentals), and worked remotely for six months part-time for her former employer, Yew Technologies. 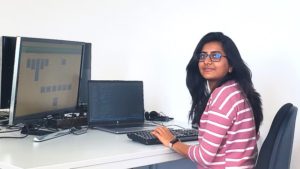 Just at the right time!
Lipi Kothadiya found her way to granIT via a job posting. For granIT Managing Director Wolfgang Bock, Lipi applied at “exactly the right time, when we had almost given up hope of actually finding a competent team reinforcement.” Since then, Lipi has been developing web-based applications with Angular, Python and SQL Server in the granIT team.
Lipi feels very comfortable among her granIT colleagues: “Here in the granIT team, I never have the feeling of being an outsider. My colleagues are always helpful… and even with a smile! My boss believes in me – can you ask for more from your employer and your colleagues?